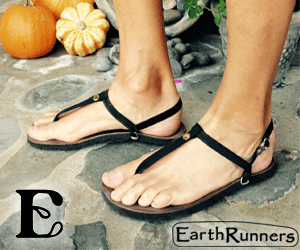 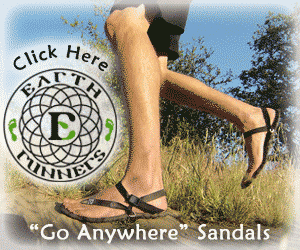 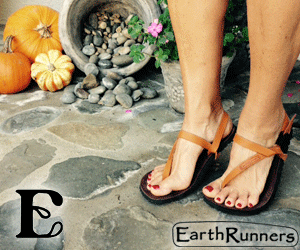 Earth Runners were created to rewild our lives in response to the typical modern domesticated lifestyle, which is causing numerous health, psychological and social issues. Through rewilding we aim to bring stronger, healthier, and more resilient individuals and communities back to our society.

In congruence with ancestral wisdom, it’s apparent that we need to incorporate more simple nature-based lifestyle practices and outsource less of our life to modern technology. With our earth-connected sandals, we aspire to restore our relationship with nature and to rediscover our primal roots.

Earth Runners were created to rewild our lives in response to the typical modern domesticated lifestyle, which is causing numerous health, psychological and social issues. Through rewilding we aim to bring stronger, healthier, and more resilient individuals and communities back to our society.

In congruence with ancestral wisdom, it’s apparent that we need to incorporate more simple nature-based lifestyle practices and outsource less of our life to modern technology. With our earth-connected sandals, we aspire to restore our relationship with nature and to rediscover our primal roots.

To help recover our connection with nature and reestablish healthy physical and biological functions.

One day founder Mike Dally found himself on a far-out adventure with miles of rugged trails between him and his car. On his feet were flip-flops, pretty weak footwear to run with on the rough terrain! As an engineer and creative tinkerer, he emptied his pack to search for the tools to strengthen his sandals. Nothing seemed to work until he found an old roll of athletic tape that had been banging around in his bag for years. After some experimentation, he came up with a design he liked and took off at top speed. Not only did his impromptu sandals (or, makeshift footwear) allow him to run with great stability–they also took his performance to the next level! Mike became passionate about trail running in sandals and soon came across the world-renowned Tarahumara Natives of the Copper Canyons who wear huarache sandals with a simple, time-tested design for trail running. Inspired by this tribe of barefoot running legends, Mike decided to make barefoot adventure sandals that maintain our connection to the earth, while allowing us to operate and explore even on the wildest landscape this planet has to offer.

The Way of Barefoot

The Earth Runners team is always finding ways to take a more rewilded and ancestrally-based approach to our health, happiness, and community. We strive to share the #RewildBeFree Lifestyle with our tribe through our sandal’s ability to #RewildYourSole.

Earth Runners promote physical health by putting feet back in connection with the earth. Our minimalist sandals offer ample ground feel, and feature our grounded conductive laces™ which mimic the primal experience of being barefoot. This technology enables the feet to engage in earthing, or grounding, which is considered to be one of the most foundational health practices. Earthing supports healthy circadian biology through its normalizing action (or ‘normalizing effect’) on cortisol hormone secretion [1] and blood flow [2], helping lower inflammation, improve sleep, and speed recovery.

Earth Runners allow you to traverse all of Earth’s geologic and hydrologic conditions while keeping you secure and free. Our sandals offer a balance of barefoot protection from the terrain underfoot and preservation of maximum proprioceptive awareness. The minimal-yet-robust huarache sandal design–the inspiration for Earth Runners–made the skill of dynamic long-range hunting by our ancestors possible. We aim to preserve ancient practices while offering the benefits of being barefoot. We created Earth Runners sandals to help people connect to nature. Earth Runners are inspired by ancient huarache running sandals, which allow feet to be free and secure while enabling the most primal adventures. We are grateful to the Tarahumara for originating this design and feel fortunate to have the ability to give back and honor the creators of the huarache running sandal.

We donate 1% of all sales to True Messages, a non-profit focused on honoring the running heritage that remains so important to the Rarámuri culture. All donations to True Messages go to projects focused on honoring the Raramuri peoples and the children of the Sierra Tarahumara. True Messages listens to the input of the local National community to determine where to allocate resources which includes sponsoring races, trail projects, and initiatives to support the youth of the community.

Thank you for helping us support the Tarahumara! Mike has thoroughly enjoyed projects from a young age. From Lincoln Logs to Legos to draining excessive amounts of electricity through his parent’s converted garage workshop, he has always enjoyed the “flow state” that arises often when creating functional gadgetry for his quest to growth and betterment. This project-driven disposition has also led him to the paths of health, fitness, and engineering.

Growing up in sports Mike regularly traveled the west coast playing outside midfielder for his soccer team. Nicknamed “the kamikaze” by his soccer coach, he ditched the pitch for a helmet to try his luck in the ritualized tribal combat known as American football. Thriving from physical training in a team environment, Mike fulfilled his Libra disposition for balance and community in this high energy setting.

His love for sports transformed into a passion for the outdoors where his next phase of development began. Attracted to the perspective and insight gained from living a more natural lifestyle, he embarked on a journey to rewild his life, modeled after the ancient hunter-gatherers who are our ancestors.

After wrapping up his sedentary responsibilities as a student and graduating with a degree in Mechanical Engineering from San Diego State University, Mike committed to a career, free of stationary work style. He took a year off in pursuit of a vision and received the inspiration to develop Earth Runners. Since its launch in 2012 Earth Runners has made a notable mark in the minimalist footwear marketplace. Now, Mike focuses on continuing to develop the sandals while building a team to propagate the #RewildBeFree lifestyle with fellow #EarthRunners worldwide. Colin is involved in a lifelong love affair with the mountains and other wild environments. He joyfully practices fitness and physical education systems which promote natural movement, such as Parkour and MovNat. Colin is a true gearhead, an ancestral skill enthusiast, and a father of 4 incredible humans. He is passionate about rewilding himself and sharing his discoveries with others along the way. Colin believes that Earth Runners are the best all-around footwear both in the city and wild environments and that freeing the feet is the first step to freeing the mind.

Colin edits and creates online content for Earth Runners, provides design feedback, and gives fantastic advice whether it’s asked for or not. Lauren has been passionate about the outdoors since a very young age. Growing up a single child, she found solace in nature and all living organisms. As she grew older, she spent all of her free time competing in sports, including soccer, cross-country, track, swimming and water polo. These activities kept her high-energy soul busy and put her outside most of the time. However, feeling the societal pressure to have a steady job, she took an internship with the Senate in Washington D.C. and returned home to earn her degree in Political Science & Pre-Med from Long Beach State University. After earning her degree, she began a sedentary and unfulfilling career as a full-time office manager. During this time, she felt a strong longing for the unforgiving and raw nature of the wilderness, wanting to spend more time backpacking in the mountains and free diving in the ocean. She finally quit her office job two long years later.

Leaving the office was a major turning point. It made her realize that her life required more freedom, movement and creativity. She then immersed herself in the fitness industry as a personal trainer and nutritionist–but still felt confined to the indoor environment.

With an open mind, Lauren was introduced to the documentary Grounded. Soon after learning the science behind earthing, she discovered Earth Runners and bought her first pair. Having only trained in Asics on her sponsored track and cross-country teams, she had always been taught that the more cushion and support the better. After experimenting with minimalist shoes for training and running, she now exclusively uses “barefoot” footwear. Her feet have remained happy and injury-free since. Aimée loves writing, creating, biohacking, and soaking in the sunshine. She attended the arts-forward Waldorf school and studied linguistics at La Sorbonne in Paris. With an inclination for the arts–along with an inquisitive spirit–she happily applies her creative passions and proclivity for learning to her work by creating captivating visual and educational content.

Growing up between the beach and the mountains fostered a sense of adventure and an admiration of nature from an early age. A free spirit at heart, Aimée has never liked fancy footwear (or wearing footwear in general). As you can imagine, she has found her home in the Earth Runners tribe!